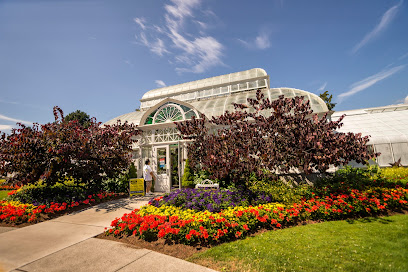 The Volunteer Park Conservatory, also known as the “Gardens of the Mind,” is a botanical garden and conservatory in Seattle founded in 1912. The beautiful building houses plants from all over the world inside its five different greenhouses. Visitors can explore rooms like African Savannah, Tropical Rainforest, Desert House, Fragrance Garden, and more!

The land was originally owned by William Bell (1855-1938), who bought it for $400 in 1887. He called his estate “Sunnyside” because of all the sunlight he felt came across it while looking at Lake Washington during sunrise or sunset. In 1903, when the area became part of Seattle proper via annexation—after years of being located outside city limits—the property fell under the control of David Denny (1832-1920). The neighborhood eventually took on the name “Belltown” because of Bell’s ownership.

After Denny died, his daughter-in-law Ada (1866-1933) inherited the property and built a mansion in 1925 after previously living there with her husband, Frank Ballard (1864-1940). At that time, they employed their gardener to care for the garden space surrounding it. When she passed away three years later, at age 67, the City of Seattle purchased some portions of land from Ballard outright while other sections were sold off over time until only one acre remained. Around this same timeframe, David Moseley—a landscape architect who helped design Volunteer Park between 1901 and 1912—was asked to redesign the garden on this property.

In 1938, Frank Ballard died, and his heirs donated it to Seattle to add to Volunteer Park with space for a conservatory—which was Moseley’s original plan in 1911 before it wasn’t realized until decades later. The city paid $20,000 upon accepting ownership of the land, which is now worth around ten times as much today because of its location next door to downtown Seattle! It opened on May 13th, 1939. During World War II (1939-1945), all greenhouses were used for growing vegetables while flower beds grew flowers to sell at local markets or give away free during “Victory Gardens” events through the United States government.

Today, the park is a popular place for families and those needing some downtime from work-related stress or other responsibilities. It’s often used by professionals looking to unwind at their own pace and without distractions which can be challenging on evenings and weekends in downtown Seattle where there tend to be many people around, especially on sunny days! The conservatory also hosts special events that range from wedding ceremonies to fundraising galas held within its walls throughout each year, including Arbor Day celebrations during springtime with free tree saplings available while supplies last. For this reason, it has been named Volunteer Park since 1939 because of all of the volunteer workers who helped make it today through time spent planting, maintaining grounds, and decorating.

The garden’s design is lush, colorful, and full of life. With its wide variety of plants to explore within the conservatory—which is rotated throughout different seasons for exhibiting purposes—it makes a great place to visit year after year! Volunteer Park Conservatory is situated next door to other well-known Seattle attractions like Kerry Park, with views overlooking downtown skyscrapers and Lake Union, which offers kayaks tours. The park itself features multiple walking paths, gardens, tennis courts, and picnic areas while also having playground equipment for kids, including slides, swing sets, and climbing apparatus for active play that gets people up off their feet during breaks from enjoying nature’s beauty indoors. There are also public restrooms available at all times if needed by visitors.

The park was designed by the nationally known Olmsted Brothers firm and is on the National Register of Historic Places. The conservatory opened in 1932 with a donation from Mrs. Bertha Knight Landes, former mayor of Seattle and first woman mayor in US history. Volunteers cared for plants there until 1971, when it became a public park.

Facts about the Volunteer Park Conservatory

The Volunteer Park Conservatory is a botanical garden located in Seattle, WA. It’s an outdoor garden that’s open year-round, but it also has the feel of an indoor greenhouse. The conservatory features more than 90 different plant collections and houses more than 2,000 individual plants worldwide.

The Volunteer Park Conservatory is an oasis of greenery and tropical plants in the heart of downtown Seattle. The Volunteer Park was built in 1912. It features a traditional English style design with a central courtyard above, which rises the free-standing dome structure covering four distinct spaces: Palm House, Tropical Room, Showhouse, and Rockery Display House. In addition, two outdoor gardens feature unique Northwest species from around 1900 through the 1940s, including Japanese maples and maple trees from Central Europe and other ornamental plantings. The largest Victorian-style greenhouse still operates today, open to visitors year-round.

The Seattle park itself is about 100 years old too. The conservatory’s glass roof covers over 2500 square feet of indoor garden space and approximately 2000 plants! That makes it the largest Victorian-style greenhouse in America that still operates today open to visitors year-round.

Take a guided tour of the conservatory.

Public programs are held throughout the year, including The Orchid Show in February and March.

Orchid Show In February And March.

Tour the tropical forest on Saturdays.

Visit during special events, including weddings or fundraising gala parties.

Wedding Ceremony At The Conservatory On Volunteer Park.

Fundraising Gala Parties Are Held Within Its Walls Throughout Each Year