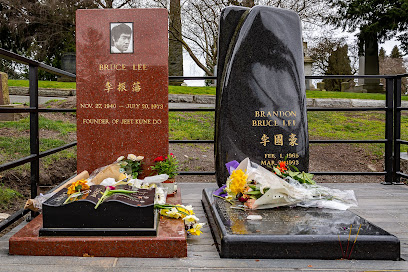 It is not often that a father and son are both iconic figures in the world of cinema. Bruce Lee and Brandon Lee were two such individuals with their legacies. The gravesite of these two luminaries has been honored for over 20 years now at Lake View Cemetery in Seattle, Washington. It is a peaceful place to pay respects to one of the most famous martial artists on earth, as well as his talented son, who tragically passed before him.

Bruce Lee was an iconic figure in the film industry and especially martial arts. He is known for his roles in The Big Boss, Fist of Fury, Enter the Dragon, and Way of the Dragon.

Brandon Lee was a beloved actor in his own right, following in the footsteps of his father. He is known for roles such as Eric Draven from The Crow, Billy Lo from Showdown in Little Tokyo, and his role as Bruce Lee in the film Dragon: The Bruce Lee Story.

History of the Bruce Lee and Brandon Lee Grave

In Seattle, Washington, the Bruce Lee and Brandon Lee Grave was a peaceful place to honor an iconic figure and his son. The gravesite was covered with flowers from fans who visited the memorial on September 26 for what would have been Bruce’s 75th birthday. Fans started arriving as early as three AM after waiting outside since midnight before the cemetery opened at seven am so they could be one of the first people inside when it opened. Underneath this grave is where both father and son are buried along with their wives Linda Emery Lee (1948-1973), aka “Linda Lee Cadwell” and Shannon Foster Lee (1965-1995), respectively. Even though there were only six feet between these two plots, each individual had separate funerals. Bruce Lee was buried on July 31, 1973, and Brandon’s body was cremated after his death from a mysterious gunshot wound in the chest during the filming of The Crow on March 31, 1993, at age 28.

In 1972, fans were allowed to visit both gravesites. Still, it wasn’t until two years later that they decided not only would it be okay for fans to continue seeing these burial plots but also hold a small memorial service every year where they could honor Bruce Lee and Brandon Lee with flowers as well as speeches about their lives through these grave sites’ history. As long as there are members still around who want to keep this annual tradition alive along with visitors continuing to pay respect by leaving behind gifts such as spray-painted messages or flowers, this will be a never-ending story.

In addition to the grave of Bruce and Brandon Lee, other graves have been visited by fans as well on this particular plot on Lake View Cemetery, including those of comedian Andy Kaufman (1949-1984), who passed away due to lung cancer but continued his career even after death through poppies left behind on his headstone; Nirvana lead singer Kurt Cobain (1967-1994), twenty years later since he took his own life with a shotgun blast in April 1994 at age 27. Also buried here is actor/director Sam Shepard (1943-2017), who was known for writing plays such as Buried Child, which won both Pulitzer Prize and Tony Award nominations along with movies like “The Right Stuff” and “Black Hawk Down.”

As of 2014, there are plans to honor Bruce Lee even more by building a Hong Kong museum dedicated solely to him. This is an idea that was brought up about six years ago but wasn’t given any attention until now, where they have already gone ahead with the construction process as well as having plenty of time before this anticipated opening date scheduled somewhere around summer 2019 – ten years after his 100th birthday. Until then, fans can still visit both gravesites on Lake View Cemetery while keeping alive their memory and through tradition, along with other celebrities residing here such as Jimi Hendrix (1942-1970).

Facts about the Bruce Lee and Brandon Lee Grave

Bruce Lee was born in San Francisco on November 27, 1940, and Brandon Lee was born on March 31, 1965. Bruce and his family moved to Seattle when he was a teenager. He graduated from Roosevelt High School in 1959.

In 1973 after returning from filming Enter the Dragon in Hong Kong, Bruce took his son to see their home country of china for the first time with his wife, Linda Emery. What they didn’t know at that point is that this would be one of their last trips together before Brandon tragically died while making The Crow film later that year on March 31, 1993.

After returning to Seattle following Brandon’s tragic death, it wasn’t long before both father and son were laid side by side each other at Lake View Cemetery in Seattle, WA. Bruce was cremated, and his ashes are interred right next to Brandon’s plot with a statue of him and Brandon over his ashes, as well as a small urn containing the rest of Bruce’s remains.

The inscription on the statue reads “In Memory Of A Husband And Father.” The front of Bruce’s grave marker is inscribed with a quote from him as well as “Bruce Lee, 1940-1973. Family Plot.”

Brandon’s grave marker reads: A Man Can Be Just If He Does Not Confuse Fame With Greatness.

Brandon’s grave marker has his birth and death dates on it as well.
A small stone bench with a dragon statue is placed in front of Bruce and Brandon’s graves. Nearby, there is another gravesite with a black granite headstone with the names of Bruce and Brandon’s parents: “Lee Hoi Chuen (Father)” and “Fannie Mei Lee (Mother).”
A red and white circular garden of flowers is placed among the gravesites of Bruce, Brandon, and their parents. There are also two other gravesites for Bruce’s nieces, Angela and Solon Lee.

A giant stone statue of a dragon is placed at the entrance to Bruce, Brandon, their parents’ gravesites, and Angela and Solon’s gravesites. The Bruce Lee Foundation placed the giant dragon statues at the entrances to these graves as a symbol of strength and courage.
A quote from Bruce Lee is inscribed on the base of one of these statues: “Be like water making its way through cracks. Do not be assertive, but adjust to the object, and you shall find a way around or through it. If nothing within you stays rigid, outward things will disclose themselves.”

Bruce Lee and Brandon Lee Grave is located at 1554 15th Ave E, Seattle, WA 98112, United States. It is not necessary to pay an entrance fee or buy a map. The site is well marked.